Sally Swing makes her first and last appearance in the Betty Boop cartoon titled Sally Swing. The character was a failed attempt to create a new character like Betty Boop based on the emerging swing music style and just as Betty Boop was designed to look and sound like Helen Kane, Sally Swing bears some resemblance to Betty Grable. The Fleischer Studios also asked Martha Raye's permission to use her mannerisms for the character. Unfortunately, the character never caught on. After an appealing introduction to the University and Betty Boop’s Examination Room, the story settles on Betty trying to find a suitable leader for a swing dance and what do you know but the hall’s washer-woman. Betty overhears Sally scat singing while dusting, and takes Sally into her office and gets her a job to lead a swing band. 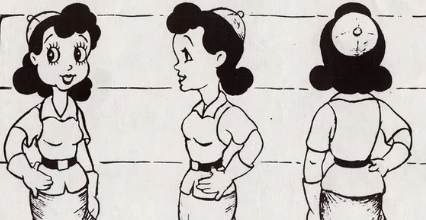 In the early design-sheet for the character Sally Swing, she is depicted as having jet black hair. The artists later narrowed the size of her head and gave her elfin eyes and her hair was also changed from black to blonde.

The Champion Comics series introduced a character similar to Sally Swing, dubbed Sally Sweet. The strip was released by Harvey Publications a year after the 1938 cartoon had been released, when band swing music was the most popular music in the United States (around 1935-1946, also frequently referred to as the "big band era"). Though this was its most popular period, the music had actually been around since the late 1920s and early 1930s. The Harvey company would license Betty Boop in the 1950s-1960s (but did nothing with the character) and would later fight over who owned the rights to the character when the Fleischer Studios tried to buy the rights back to the character in the 1970s. 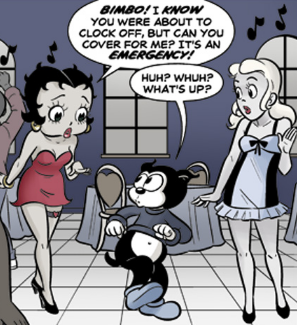 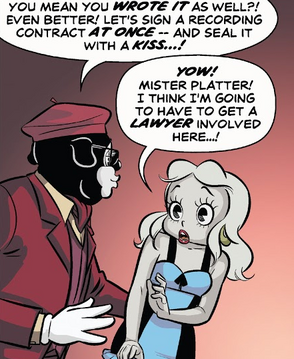 Sally Swing was revived in 2016 and is featured in the new Betty Boop Comic Strip (2016) by Dynamite Comics alongside many other familiar faces from the Betty Boop cartoon series. Sally is more or less a background character and works at the Oop-A-Doop Club, where she collects glasses and works as a waitress. In comic #3 Sally is given a bigger role. She persuades Betty to dress up as her and sing to impress her boyfriend Zach Platter. Zach gets a little amorous with Betty which makes Sally a little jealous. Betty ends up impressing Zach Platter who raises a toast to their new relationship.

Sally has lost her ability to sing. According to Roger Langridge: "She sings horribly – granted, that runs counter to the cartoon she originally appeared in, but maybe she gets some singing lessons after this story. And it gives us an excuse to get Betty on stage later, so that’s all to the good. After all that, I thought Sally deserved a break – so I had her awful singing be a new source of attraction to Zach Platter, and sent those crazy kids off into the sunset together. Betty’s final point is from the heart – who knows what’s going to attract another human being? There’s someone out there for everyone…" Indicating Sally's new persona in the comic was to counter her appearance in the 1938 short, to bring more of a personality.

On the 25th of September in 2017, Rose Marie the original voice of Sally Swing referenced Sally Swing on her official Twitter account, stating it was her original character in the 1938 Betty Boop cartoon Sally Swing.