Louis Bolton was a Russian-American talent agent who conducted a theatrical school in the City of Pittsburgh where he taught children and adults dancing, singing, dramatic art and anything pertaining to the show business in general. Lou had been engaged in the business in the city of Chicago since 1922 and had been in show business for 20 years. Lou had first met Little Esther (Esther Lee Jones) in 1923 and had first seen her perform live at The Sunset Club in Chicago, Illinois. When Bolton first became her manager she was a Charleston dancer. In 1934 Bolton was principal witness for Paramount-Publix and Max Fleischer in Helen Kane's $250,000 Infringement Lawsuit suit for using the "Boop-Boop-a-Doop" expression in the Betty Boop cartoons. Bolton claimed that his colored prodigy, "Little Esther," was "Boop-Boop-a-Dooping" it long before Paul Ash discovered Miss Kane, in fact Bolton stated that he had first been introduced to Helen Kane at Tony Shayne's (who was the agent for Little Esther in 1928) office, Broadway at 47th Street, New York City. According to Lou Bolton, Little Esther delivered her "Boops" in April, 1928, Helen however didn't introduce her "Boops" until the premier of the hit Broadway show Good Boy on the 5th of September, 1928, in which she introduced her signature song "I Wanna Be Loved By You". Helen didn't officially record the song on record until the 20th of September, 1928. Bolton stated in court that Helen and Tony had ringside seats at the Everglades Club on Broadway in early 1928 when Baby Esther was actively scat singing.

Lou Bolton produced the floor show. It is featured by Flo Lewis and her Six Redheads. Miss Lewis was among those stranded in this city by Al Jolson's sudden decision to discontinue the Chicago engagement of Big Boy. You don't realize how much "kid" there is in the average citizen until you see Flo Lewish handing out lollipops in one of her numbers. The customers took them, gazed at them for a moment, looked guiltily about, and then went at the candy like a bunch of eight-year-olds.

Manager and booker of 7-year-old pleaded guilty. For permitting a seven-year-old girl to appear publicly and dance and song act without obtaining a permit, Louis Bolton, theatrical manager and booking agent of 1376 Broadway, and William Jones, decorator, of 44 West 98th street, were each fined $100 in Special Sessions. The two pleaded guilty to the charge. Both men were arrested on the complaint of agents of the Children's Society after the latter had witnessed Esther Jones, the minor daughter of one of the defendants, do an imitation of the late Florence Mills at the Everglades nite club, June 13. The officers told the Justices that the child did her act at the club at 9pm and again about midnight.

Lou Bolton, for several years, an independent theatrical agent in Chicago, has finally fallen into good luck. Lou has a protege called Li'l Esther, who is called "The Miniature Florence Mills." The child has just finished a four years' training under Bolton's management and recently won a European engagement through her New York success. Her eccentric dancing and her inimitable singing places her in a position as the most phenomenal juvenile in the profession. 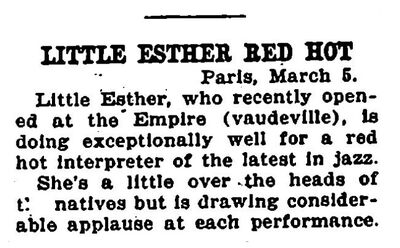 Little Esther, who recently opened at the Empire (vaudeville), is doing exceptionally well for a red hot interpreter of the latest in jazz. She's a little over the heads of the natives but is drawing considerable applause at each performance. 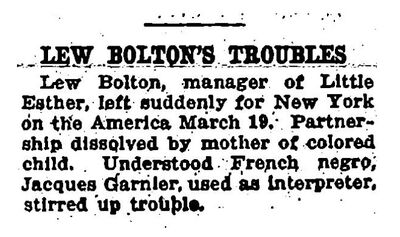 Mrs. Jones is immensely proud of her wonderful little daughter. She told the Berlin correspondent of the Defender a long story of her troubles and hardships with the white manager with whom she had left America. She accused him among other things of trying to "Jim Crow" her and to pass her off as the maid of her child. Whenever they went to private homes to fill engagements she would be left to wait in the hallway. She said that at the home of M. Dreyfus, French banker. While waiting in the hallway that Mr. Dreyfus himself came out and smoke to her and when he learned that she was the mother of the child, invited her and introduced her to his guests. Later, says Mrs. Jones, the white manager scolded her and asked her if she did not know that that wasn't done in America. Mrs. Jones declares that she is thoroughly satisfied with Mr. Garner's management, and that he submits all contracts to her so that she knows just what the child is earning. Mr. Garner, who comes from New York city, has been in Europe for 16 years and is well acquainted with the theatrical situation. He speaks several languages and has served as secretary and interpreter for many Colored stars, among them being Johnny Hudgins.

In 1929, Lou Bolton had an argument with Esther's mother Mrs. Jones. After the heated argument about her contract he returned to the United States. Management was then taken over by Sydney Garner. Information given is that Lou Bolton was stingy with the money Baby Esther was earning, and that he was only giving the Jones family $8 and keeping the rest for himself, so he was fired from his job and returned to America. Sydney Garner took over where Bolton left off, and fairly gave Esther Jones and her family the money she had rightfully earned.

Shorthand no medium for setting down Helen Kane's 'Oos' and 'Da-Das'. The court stenographer "threw in the sponge" today in the trial of Helen Kane's "Boop-Oop-a-Doop" suit against several motion picture producers. While a witness recited the purported history of "Oo," and "Doo" and "Da-Da" interpolations in popular songs, the stenographer threw up his hands and told the court his pot-hooks could not set down the "meaningless sounds." He asked for assistance, which the witness could not provide. A lawyer for one of the defendant companies suggested letters which would complete the record and the trial went on. Miss Kane is suing Paramount-Publix Corporation: Max Fleischer, cartoonist, and Fleischer Studios, Inc., for $250,000 damages allegedly resulting from their use of the singer's "Boops, etc." Lou Bolton, theatrical producer testified for the defense that Miss Kane heard a night club singer interpolate "Boo," "Doo," and "Wha-Da-Da" and other "meaningless sounds at the end of each bar of music" in April, 1928. A few weeks later Bolton testified. Miss Kane first began to use "Boop-Oop-a-Doops" in songs.