Fearless Fred is Betty Boop's semi-regular boyfriend who appeared in the earlier cartoon series from 1934 to 1935. He made his first appearance in She Wronged Him Right. In Betty Boop's Trial, policeman Fred pursues Betty while she accidentally breaks the speed limit. He arrests her and takes her to traffic court. Fearless Fred made several other appearances throughout 1934: in Betty Boop's Life Guard, There's Something About a Soldier and Betty Boop's Prize Show. His last animated short was 1935's No! No! A Thousand Times No!!, an old-fashioned melodrama. He also had a one-time appearance in the original comic strip series, and in the 1985 animated film The Romance of Betty Boop. Fred was last seen in the 1990 comic book special Betty Boop's Big Break, in which he appears as a lifeguard.

The Romance of Betty Boop

Fearless Fred appears as Freddy the Ice-Seller in The Romance of Betty Boop, and has a crush on Betty but Betty seems more interested millionaire Waldo Van Lavish. After saving Betty from the gangsters Betty and Freddy confess their love for one another in song, but near to the end of the film Betty gets a call from Hollywood and is offered the chance of a lifetime. It is hinted that she chooses Hollywood over Freddy. 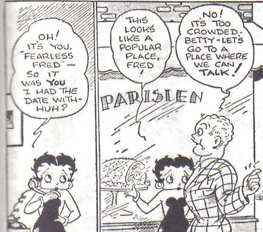 Fearless Fred also appears in the Betty Boop comic strip. He appears as one of Betty's many boyfriends. Betty meets up with Fred to go to a restaurant. Fred's hair is a light blonde or red instead of jet black like in the cartoons.