Dizzy Dishes is a 1930 cartoon about out-of-work actors who work at a nightclub. The short film begins with a chorus of singing flapper cats. Bimbo waits on a hungry gorilla and then goes to the kitchen to prepare the order, roast duck. When he is about to bring it to the gorilla's table, he sees an anthropomorphic French poodle-esque caricature of Helen Kane (dubbed "The Original Boop-Boop-a-Doop-Girl,") performing a "Boop-Oop-a-Doop" song onstage, and falls in love at first sight. He completely forgets about his hungry customer and dances onstage with the duck. The gorilla gets furious and begins to chase after Bimbo, who escapes on a wooden train.

"In 1930 I created Betty Boop. By brief history is that - uh - I don’t know if you’re interested. I worked for so many studios. I started with a dog with long graceful ears and a cute little collar, but I thought a dog can't sing this song." One day, Dave Fleischer handed Grim Natwick a photograph of singer Helen Kane and asked him to design a caricature. Fleischer had found a sound-alike, and planned to use her in the upcoming Talkartoon, Dizzy Dishes. Grim exaggerated Kane’s wide eyes and rosebud mouth, creating a slightly coarse, but strikingly original design. A few weeks later, Dave Fleischer asked Natwick to design a girlfriend for Bimbo to star as the "fair young maiden" in a cartoon adaptation of the popular song "Barnacle Bill The Sailor". Natwick streamlined and refined his caricature of Kane for the part, but Dave Fleischer objected, insisting that since Bimbo was a dog, his girlfriend should also be a dog. Natwick quickly sketched Betty Boop’s head on a four-legged canine body. He held up the drawing next to the pretty girl design, and asked, 'Which would you rather have as your girlfriend? A girl? Or a dog?' Fleischer laughed and agreed that the pretty girl was the right choice

At the age of seventeen Marjorie Louise Hines won first place in a local Helen Kane impersonation content sponsored by Paramount Pictures, which was held in Brooklyn. According to Helen Kane, Hines had actually entered three Helen Kane impersonation contests and was best known for her Helen Kane impersonation. Hines went on tour and was seen performing by Billy Murray, who found what the Fleischer Studios were seeking in Betty Boop. Hines was the original voice of Betty Boop and shared it with Mae Questel who was given the role in 1931, up until Hines left the role in 1932. Hines' vocals as Betty Boop differs in many of the earlier cartoons. For example in Mysterious Mose, Hines sounds completely different to how she portrayed Betty in Dizzy Dishes and Barnacle Bill. 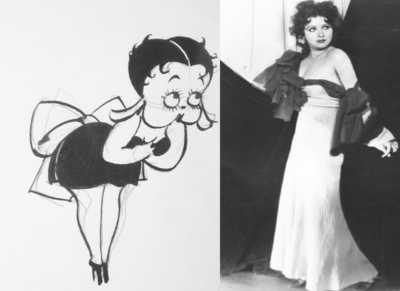 The as-yet-unevolved Betty Boop is drawn as an anthropomorphic dog. Except for the ears, she resembles a human girl in her latest incarnation. Also, she is merely a side character; the plot of the story revolves around the incompetent chef Bimbo and the irate gorilla-customer.

The character that debuted in Dizzy Dishes was such a massive hit that Fleischer Studios decided to use her again. Dave Fleischer had regarded Betty as being very ugly in her first appearance, so they gradually re-designed her. In the 1930 short Mysterious Mose, Betty had became slimmer and, by 1931, she had lost the snout.

From 1932 onwards, she became a fully human character. Grim Natwick created Betty Boop after he was handed a photograph of 1920s singer and actress Helen Kane, and had used Kane as the basis for Betty; Kane later launched a lawsuit over this, only to lose because she failed to prove her claims as her singing style was quite common in the early 1920s-1930s, plus every flapper girl (most prominently Clara Bow, the "It Girl") had similar hairstyles and looked very similar to Kane.

It was later discovered that Kane had taken the scat lyrics from a little-known African-American child performer from Chicago by the name of Baby Esther. Other claims were that a witness had heard the phrase uttered in an Edith Griffith song, and another defense asked Kane if she had heard a 1913 song called "Bou Dou Ba Da Boum", which she denied. It also came out that Helen Kane's singing style was not unique, as other performers sung in the baby style before she had, and a galaxy of performers had interjected "hot licks" into songs before she did.

When Helen Kane sued she also claimed she invented "interpolating" scat sounds into music before anyone else. It was proven in court that Clarence Williams, had done it first. Another notable scat singer was Cab Calloway who was featured in some of the later Betty Boop cartoons. After the trial had taken place Gertrude Saunders came out as "originator" of "Boop-Boop-a-Doop" as made famous by Helen Kane, as she had interpolated scat sounds into songs long before Helen. Gertrude claimed that Helen had coined her act.

Child star Baby Esther was the spiritual successor to Florence Mills, (and often impersonated Mills at the Everglade Nite Club on Broadway in 1928.) Florence in turn was the successor of Gertrude Saunders, which made Gertrude originator of said style.