This article is about Baby Esther Lee Jones. Not to be confused with Little Esther Phillips. See Gertrude Saunders for the originator of Boop-Boop-a-Doop. You can check out a scat-singing timeline here.

Footage of Jones scatting and baby-talk singing and other evidence given in court is what helped Justice Edward J. McGoldrick rule in favor of the Fleischer Studios. Which was that Helen Kane's singing style was most common to a number of "Boop-a-Doopers" even before Helen had claimed she had invented the idea and mannerisms.

Baby Esther Lee Jones originally billed (Lil' Little Esther)[1] was a child entertainer who lived in Chicago, Illinois. She was managed by her mother Gertrude Jones, her aunt Ruth Jones, her father William Jones, and later by Sidney Garner. Esther was a trained scat singer and had been scat singing since 1925, a dancer, and acrobat since 1923. She used to perform regularly at nightclubs in Harlem and all over the United States during the early 1920s and was given great reviews by the white press who stated that in time she would be the next Florence Mills. During the 1920s Baby Esther performed in Chicago, New York, St. Louis, Jackson, Michigan, Toronto, Ontario, Atlantic City, Elizabeth, Union City and New Jersey. In her act Baby Esther would dance, make funny faces, roll her eyes and interpolated words such as "Boo-Boo-Boo", "Wha-Da-Da", "Doo-Doo-Doo"[2] & "Do-Do-De-Do-Ho-De-Wa-Da-De-Da," "Boo-Did-Do-Doo," "Lo-Di-De-Do," and would finish off her unique scatting routine with a "De-Do" in rhythm. A majority of these scat techniques were taught to Esther by her manager at the time Lou Bolton. Bolton claimed that in Chicago he taught Esther how to interpolate "scat singing"[3] between the bars of music in popular songs.[4] Other scat sounds Esther used to interpolate include "Roop-Woop-a-Woop," "Ud-Up-Deo-Do," "Skeet Scat," "Bup-Bup," "Poo-Poo-a-Doo" long before Helen Kane. "Roop-Woop-a-Woop" was one of the many scat interpolations used by Esther Jones, which sort of sounds similar to Helen's "Boop-Boop-a-Doop" routine that Kane debuted in the same year.[5] It is said in history that Helen Kane had adapted[6] the scat sounds she had heard Esther interpolate and changed one of the latter to "Poop Poop Padoop," first using it in the Broadway musical Good Boy in which she interpolated the scat sounds into the hit song "I Wanna Be Loved By You" in which Kane became famous overnight. Helen's first two recordings "That's My Weakness Now" and "Get Out and Get Under the Moon" prove this. When Kane tried to sue the Fleischers an early test sound film was discovered which featured Baby Esther performing in this unique style, disproving Kane's claims of inventing the scat lyrics. Baby Esther's ex-manager Bolton testified that Helen Kane had saw Baby Esther's cabaret act in 1928 with Tony Shayne, and then not too long after Kane suddenly started to scat sing in shows. Supreme Court Judge Edward J. McGoldrick ruled: "The plaintiff has failed to sustain either cause of action by proof of sufficient probative force." In his opinion, the "baby" technique and "scat" style of singing did not originate with Kane. Little Ann Little, Margie Hines, Mae Questel, Bonnie Poe were then focused on in the second part of the trial. Helen attempted to prove that they performed their vocal shimmies in a way so similar to her that it constituted unfair competition. At the Everglades Nite Club in 1928, Esther would often impersonate her idol Florence Mills[7] and was known as a Florence Mills impersonator. Mills was known to incorporate a "Tooty-Tooty-Too" into her song "Baby and Me" years earlier. At the Everglades, Esther would sing Florence Mills' most famous songs and would also dance and often uttered her "Do-Do-De-Do-Ho-De-Wa-Da" on stage, a unique scat singing style which is said to have originated from other black stars. This was backed up in court by dancer Miriam Luber.[8] Florence Mills[9] was likely Jones' inspiration, who in turn was emulating "scat singing" originator Gertrude Saunders. When Max Fleischer, invented Betty Boop he was not only imitating Helen Kane but a whole image of women in the 1920s. Helen Kane did not initiate the phraseology "Boop-Boop-a-Doop" even though she most certainly popularized it. This catchy, inane line of scat was first used by Edith Griffith and in "alternative scat form" by Gertrude Saunders, Mae Barnes, Florence Mills, Baby Esther and others. Bessie Smith's rival Gertrude Saunders is often cited as the original "scat singing" sensation and spoke out against Helen Kane and Betty Boop in 1934 by saying she "did it first in 1921" while performing in the all-black Broadway musical Shuffle Along. Esther Jones was most popular in European countries such as France especially Paris, Sweden, Germany and Spain. Also the capital of London, Brazil and South America. Shamus Culhane best known for his work on the early Betty Boop cartoons references Esther Jones in his 1986 book Talking Animals and Other People which states "under careful cross-examination Kane had to admit that she, in turn had copied the 'Boop-Boop-a-Doop' business from an obscure black singer Baby Esther." [10] As of 2021, Esther has been paid homage by Taraji P. Henson and Big Freedia.

In 1929, Esther won a contract and toured the European continent.[11] While touring Europe she became famous, most promptly in Paris. After Paris, Esther went to Spain, Berlin, Oslo, Sweden, Milan and London. Her manager originally was Russian-American Lou Bolton, but he was fired in Paris for Jim Crowing the Jones family out of their rightful earnings. Esther's new Parisian manager Sydney Garner led her to success. Esther toured in Ernst Rolf's revue from 1929-1930. After touring Europe, Esther went to Brazil where she proved to be a hit, but later returned to America when Sydney Garner fell ill.

Once Esther returned to America, she became a dancer for Cab Calloway[12] and then toured the vaudeville circuit under the name "Little Esther the Sepia Dancing Doll."[13] She was also booked by The National in Helena Justa's revue called the Harlem Maniacs from 1933 to 1934.[14] Esther was also present in the United States while the Betty Boop suit was taking place, but she did not comment or respond to her name being brought up in the lawsuit, most likely to Lou Bolton having Jim Crowed her in Paris. In July of 1934, Esther took part in an all-black NAACAP benefit show. It stated that by then Esther had too much art and finesse, and that she was born of her extensive travel and contacts and that after her performance, applause usually followed the more abandoned type of expression. Esther is last referenced in September of 1934. It stated that Esther Jones did acrobatics at Bill "Bojangles" Robinson benefit show. It is stated that Esther became a full-time acrobat and continued to perform on the stage. But by late 1934, Esther's popularity died down and there were new black child performers on the scene taking the spotlight, such as the Kiddie Radio Group. Baby Hilda and Baby Selma succeeded Baby Esther. Baby Selma from Philadelphia was considered to be the next Florence Mills.

During the $250,000 Infringement Lawsuit Helen Kane's attorney Samuel Weltz claimed that the footage of Baby Esther singing was irrelevant, incompetent and immaterial and stated that Esther Jones was a Helen Kane impersonator. He was denied by the court.

Lou Bolton conducted a theatrical school in the City of Pittsburgh where he taught children and adults dancing, singing, dramatic art and anything pertaining to the show business in general. Lou had been engaged in the business in the city of Chicago since 1922 and had been in show business for 20 years. Bolton first met Little Esther in 1923, where he saw her performing at The Sunset Club in Chicago, Illinois. When Bolton became her manager she was a Charleston dancer and danced in the streets of Chicago. Lou gave footage to court of Esther performing her unique "Wa-Da-Da" technique. It was one of the many scat techniques used by Jones in which inspired Helen to scat sing in the first place. Esther's career took off one year later in 1929 when she was given a contract to tour Europe. In her prime Esther Jones was the highest paid child performer in the world.

Helen Kane's Boop-Boop-a-Doop trial today went Booping back to the night clubs of 1928 and a little Negro girl, proclaimed as the original Dooper. It was Summer of 1928, Helen already has told Justice McGoldrick, that she pursed her lips first and "laid 'em in the aisles" with her initial Boop-Boop-a-Doop. That date is important in her $250,000 suit against Paramount Publix Corporation and the Fleischer Studios for imitating her in the Betty Boop animated cartoons. For Baby Esther, 8 year old girl, delivering many a Boop-Boop-a-Doop in New York months before according to the testimony of Lou Bolton, the child's manager. Bolton claimed that Helen had a ringside seat at the Everglades Club on Broadway one Winter's night when Baby Esther was Booping - that was before Helen's first Boop too. The defense, through Attorney Louis Phillips, also submitted testimony that Helen actually encouraged imitation. The article states that Helen Kane allowed Mae Questel, Margie Hines among numerous girls to imitate her.

On the 4th of November a song titled "Baby Esther" was released by singer Kyle Dion. Child performer Baby Esther Lee Jones was played by Widny Bazile. Esther is depicted as an adult, as at that time most people thought that Esther was a woman who looked like Betty Boop.

The song dubs Baby Esther a "Cabaret Queen" and references plagiarism. Esther was known to have performed at cabarets and night clubs, including the Moulin Rouge and all over the place most promptly Europe. 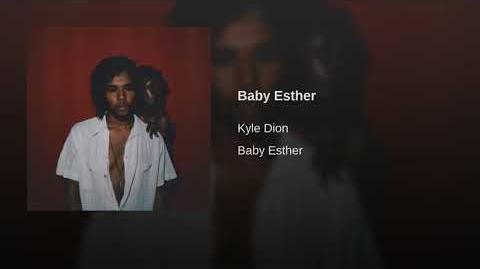 The song was produced by Joel Alexander Van & Mars Today with co-production by Nate Mercereau. The song was mixed by Erik Madrid and was mastered by Chris Gehringer.