Baby Boop is a younger version of Betty Boop. She is given a lot of screen time in the Betty Boop cartoon titled Is My Palm Read, Bimbo gazes into a crystal ball and to reveal Betty Boop her baby days. The scene shows a nude Betty Boop as a baby taking a bath, She falls out of the bath tub and as she begins to cry, the coat hanger puts a blanket over her to which she replies "Boop Boopy Doop". Two other baby forms of Betty (depicted as Betty's children in a music scenes) also appear in Stopping the Show and The Betty Boop Limited. According to King Features; Betty Boop and her younger self, Baby Boop, are adding some sparkle to children’s fashion with a new line of apparel already on shelf in more than 20 markets across the U.S., the U.K., Europe, Asia and the Middle East, King Features (Betty Boop’s exclusive worldwide agent) negotiated the partnership and is targeted to kids ages infant to 12, the clothing line includes t-shirts, dresses, jackets, swimwear and more.

The Creation of Baby Boop

According to information Baby Boop never originally existed and her baby days were made up, as she had originally debuted as an anthropomorphic French poodle in the 1930 short Dizzy Dishes. According to Mel Birnkrant an American toy design and collector of the short lived Betty Boop comic strip (which he dubbed awful), as produced by King Features who had licensed Betty Boop at the time from the Fleischer Studios. Harry Kislevitz, who was Mel's former employer blundered and made King Features millions on his Betty Boop idea. Several years later Mel was working on a  Mickey Mouse Colorforms project. Mel had enthusiasm for Betty Boop and decided to introduce Harry to her with his 16mm Betty Boop animated cartoon that he had collected Betty Boop's Bizzy Bee. According to Mel after seeing that Mel had Mickey Mouse, Harry decided that Betty Boop would be his muse and hired a couple of women to create a Betty Boop doll without telling Mel. The finished product looked like Raggedy Ann. Harry was not secure in producing the doll without the proper legal rights and decided to ask King Features, from whom he had licensed Popeye for advice. Mel later found out and told Harry that the Fleischer family owned the rights not King Features and that they should have asked them first, but it was too late. When Harry contacted King Features they told him they owned the rights, which is true they did own half of the Betty Boop product and still do today and have a lot of say in what the character does. Here's some trivia directly from the Betty Boop Wikia, a lot of people don't know that King Features are 100% behind Betty Boop's image today, and have been for many years, they also have a lot of input who does the voice for the character and how her image comes across to the public. Anyway according to Mel, King Features thought that the Fleischer Studios were dead so the onetime licensee became the licensor. Harry licensed the comic strip, not the Betty Boop property. Kenny Kneitel's mother told Mel that King Features had became the administrator and that Kenny's family had got half a royalty. Colorforms could not sell the Betty Boop doll.

While working on the doll Mel came up with a concept. The concept was Baby Boop.

According to Mel the character did not exist. (Betty Boop as a baby made an appearances in a few shorts but was never a fully licensed product) Mel got the idea from the cartoon Making Stars and decided to represent Betty when she was a baby. His design was based on the babies that had appeared on the show. Mel projected the film on paper and traced off it.

The concept design used was one of the male baby Quintuplets, similar to that of the Quintet Kiddies that appeared in the comic strips as based on the Dionee Quintuplets. Harry hired the women to make the baby as vinyl dolls were their forte but they didn't adapt it to baby proportions. Mel knew the doll had a future and came up with a mechanism that would permit Baby Boop's eyes to roll. Harry then hired a product development team company to help build the prototype. The rag doll proved to be impossible to sell and the idea was scrapped. Harry had the Betty Boop Colorforms Dress-Up Set in the works. Harry was urged to hire Kenny to design it. Betty Boop was past her prime at the time but was on her steps to becoming popular again with King Features on the receiving end of what would become millions. 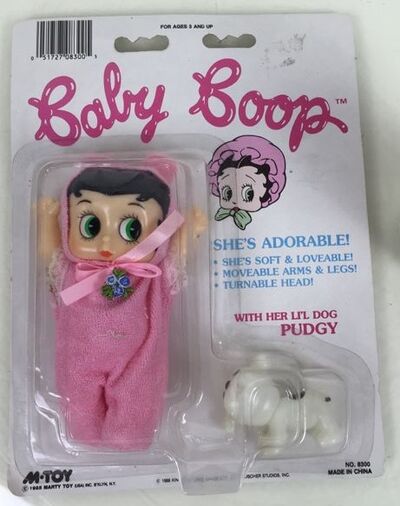 Harry tossed Baby Boop into King Features lap and they picked her up and ran. Mel's Baby Boop never saw the day of light but a hundred prototypes were made. After that King Features then had to approve everything.

According to information about Baby Boop's licensing (directly from King Features) she debuted in 2006 to meet the demand of child fans of Betty Boop and now grows globally in several countries. Earlier Baby Boop dolls were released in the 1980s, one by King Features, the other by M-Toy later followed by Baby Boop releases by Betty Boop Precious Kids Dolls and Danbury Mint.

Baby Boop was originally set to appear in The Betty Boop Movie, but the project was abandoned, and later canceled.

A Day With Baby Boop

Baby Boop made her most recent appearance in a virtual story book titled A Day With Baby Boop (2013). You can spend a unforgettable day with Baby Boop and go with her and enjoy activities such as walking in the park, getting dressed up or playing sports.

On the 20th of July (2013) a Baby Boop look-alike contest was held, during the 22nd Betty Boop Annual Festival.  The Baby Boop Look-Alike contest was open to young girls from newborn to 5 years old. The judging categories in each age group included: Largest Eyes, Curliest Hair, Poutiest Lips, Friendliest, Singing Dancing in three categories of costume (Baby, Classic, International and Showgirl). Everyone receives a trophy.

According to one of the current voices of Betty Boop, she was originally to play the role of Baby Boop in the Betty Boop Musical (Betty Boop on Broadway) but it was canceled.

Retrieved from "https://bettyboop.fandom.com/wiki/Baby_Boop?oldid=34950"
Community content is available under CC-BY-SA unless otherwise noted.